Merging names allows to combine the information from two separate name records that should really be one and the same name.

When two names get merged, information that “belongs” to the name (such as invoices, or event signups, among others) are assigned with the resulting single name. Information about the name itself (such as first name, last name, company name, various flags, author images,...) get merged (which can potentially cause conflicts).

When names get merged, there is a “target” name, and a "source" name. The “target” is the name that remains after the merge operation, while the "source" name is the one that is merged into the other and then removed (so only one name with all the infomration remains). The “target” name is generally the more important one, while the "source" is seen as a duplicate that should not really be there and is thus merged into the target. Note that the “target” name is ranked higher in importance. If the two names contain conflicting information, the "target" name generally wins. For instance, if the two names define different company names, then the company name of the “target” name is chosen by the system to move forward.

There are different ways to merge names in Olympus, although currently, only one is supported (more will be rolled out shortly).

Merging from the Name Edit Form

Note: It is important to understand that the name that is open for editing is the “target” name (the one that remains after the merge operation), while the one that is picked in addition is the "source" name (the name that data is being “pulled in from” and that will afterwards be removed from the system).

If a valid source name is picked, the following dialog shows the progress of the merge operation: 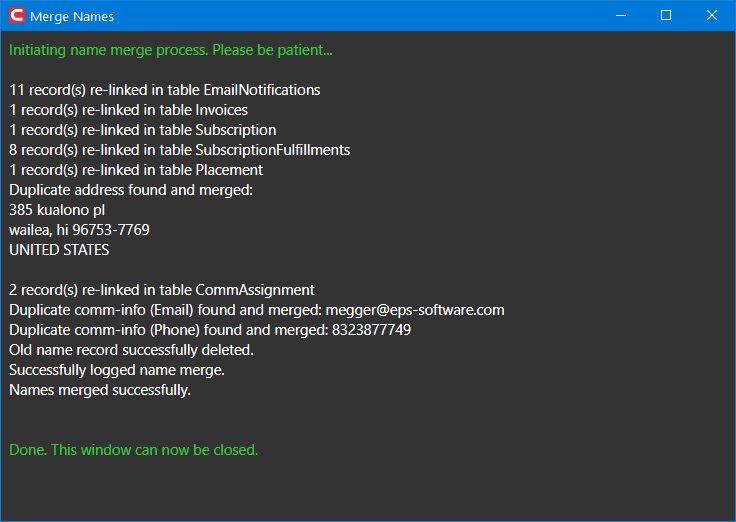 Once the merge completes, Olympus closes and re-opens the target/remaining name with all its information.

Note: Olympus may incorrectly ask to save changes as part of this. Ignore that dialog by clicking No. This is a current limitation/oddity we are aware of and that is on the list to be fixed.

This is not yet supported, but will be rolled out in a subsequent update.

What is being merged

The following related information is linked to the target name:

The following information is merged:

At the end of the merge operation, the source name is removed (all applicable information has been merged into the target and is thus not needed anymore). The system also logs the merge operation in the merge log, in case we need to later figure out what happened.