MobiPocket is the format originally used by Kindle. Amazon has since switched to ePub, but we are still supporting MobiPocket for those who want to use it.

We export indiviual issues as MobiPocket files (.mobi file extension). This action can be triggered from the Attachments tab in the issue edit form:

When the Generate MobiPocket button is clicked, the systme first checks to see if there already is a MobiPocket file attached to the current issue. If so, the user is asked for confirmation to replace the existing file. (Only one MobiPocket file can exist for an issue).

The user is then asked to pick a local file name, as a mobi file is stored on the local harddrive (see below), in addition to being stored with the issue in our database.

The system then proceeds to load the issue, load all the articles and authors, and exports the content of the articles in a way that is compatible with MobiPocket (including images, author photos, cover image,...). Then, the content is compiled into the MobiPocket file using the MobiPocket compiler provided by Amazon. While all of this is going on, the system displays the output in a verbose way in a “console” or "terminal" window (which is read-only). 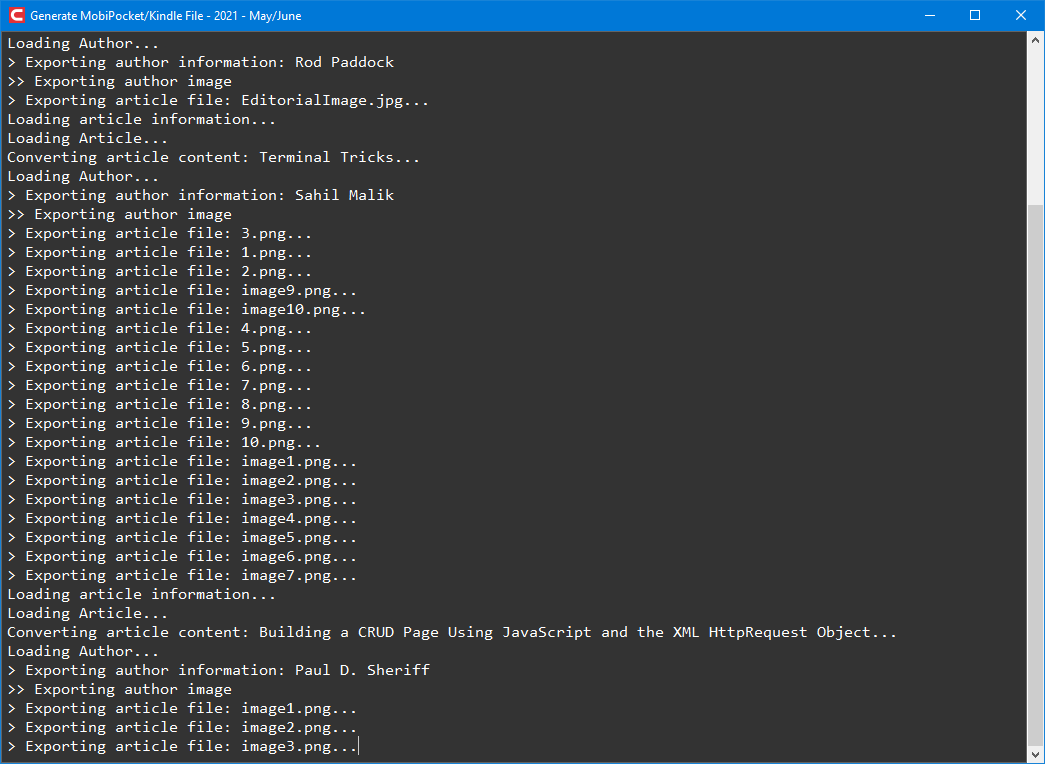 This window remains open even after the process completes. This is useful as detailed information about the generation process can be seen in this window (including potential errors and warnings).

When the process finishes, the final MobiPocket file is put into our database associated with the issue, and it can be seen in the Attachments tab of the issue edit form under the MobiPocket category.

MobiPocket files require special MobiPocket readers to view. One can download a MobiPocket reader. Note however, that this reader is very old and outdated and sometimes shows the resulting file wrong. A better way is to view it with an actual Kindle reader (either a physical Kindle device, or through the Kindle for Windows, iOS, or Android software). An easy way to get a mobi file onto your Kindle is to email it to your Kindle account (such as megger@kindle.com for Markus' Kindle).

Once a MobiPocket file is generated and attached to an issue in our database, it automatically shows up on the web site so subscribers can download the file.